This story from phys.org is interesting:

In a major step toward making a quantum computer using everyday materials, a team led by researchers at Princeton University has constructed a key piece of silicon hardware capable of controlling quantum behavior between two electrons with extremely high precision. The study was published Dec. 7 in the journal Science. The team constructed a gate that controls interactions between the electrons in a way that allows them to act as the quantum bits of information, or qubits, necessary for quantum computing. The demonstration of this nearly error-free, two-qubit gate is an important early step in building a more complex quantum computing device from silicon, the same material used in conventional computers and smartphones. “We knew we needed to get this experiment to work if silicon-based technology was going to have a future in terms of scaling up and building a quantum computer,” said Jason Petta, a professor of physics at Princeton University. New silicon structure opens the gate to quantum computers 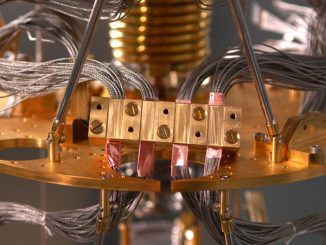 Why Microsoft believes we’re on the threshold of quantum computing

What Do You Think?

The Future is Here!